I had been thinking for several weeks about much I would enjoy having a puppy to train to be a third hiking and backpacking companion, like Mollie was. What has also been on my mind is that Beau is nine and Hayley is 12, and the years go by so fast. My life without a border collie would be empty.

The problem with that was the question of whether I would be around to take care of a new pup, after the heart problems I had in December. But the echocardiogram on the day before my second heart stent put those thoughts to rest. It showed my heart was in good condition, with just minor leakage in the valves. Once the blocked arteries were corrected with the stents, I would be given a clean bill of health. And I felt 100% better after the second stent, no shortage of breath, no chest tightness or pain. In fact I went dancing for New Year’s Eve, and danced hard, three and a half days after the second stent placement.

Both my daughters were there before the second surgery, which I really appreciated. (on a Wednesday) I was relaxed and talkative after the valium the nurses gave me during prep, and mentioned that if someone were to gift me a border collie puppy I would not refuse it. I meant it though. Amy took my request to heart and came through for me. She found a border collie puppy under the farm and garden category on craigslist. (Credit goes to Amy for looking there. I had seached craigslist often, and there were not many border collie puppies showing up from the main search.) The next Sunday I took Beau and Hayley and 3 ½ month old Jess on a walk down to the river.

This first week I got to watch little Jess bond with Beau and Hayley, and to get acquainted with her new yard and frequent walks down along the river. She came from the plains, out by Sterling, Colorado. (Jess’s mother worked cattle) On the first couple of walks I saw her three times go up to trees and gaze up their trunks to the tops. When I let her off leash the first time with Beau and Hayley, she stayed right with them, innately understanding you stay with your pack, which she already felt a part of. She especially adores Beau, and will follow close behind him. On leash she regularly leans over and nuzzles his face.

Jess has a good disposition, with other dogs and with all people. She follows me from room to room in the house. She learned how to open the hinged dog doors to the outside on her second day, and when I am out there tending the chickens she has to accompany me. Jess likes to herd them back into their run, but has not attacked any of them. (Her owner said she had chickens and ducks, so Jess was already introduced to them).

I am trying to alter my mindset from assuming I have predictable dogs like Beau and Hayley, and to be extra careful about keeping my wild and occasionally erratic young dog safe.

Having a young dog will be good for me, because I will to do everything I can to make sure I am here to take care of her. And she will keep me moving. Beau and Hayley, Jess and I have been on long walks on eight straight days. Jess is learning she can rely on me and is loved like Beau and Hayley are. A cup of coffee and joy in the morning from a little border collie pup is a wonderful way to start the day. 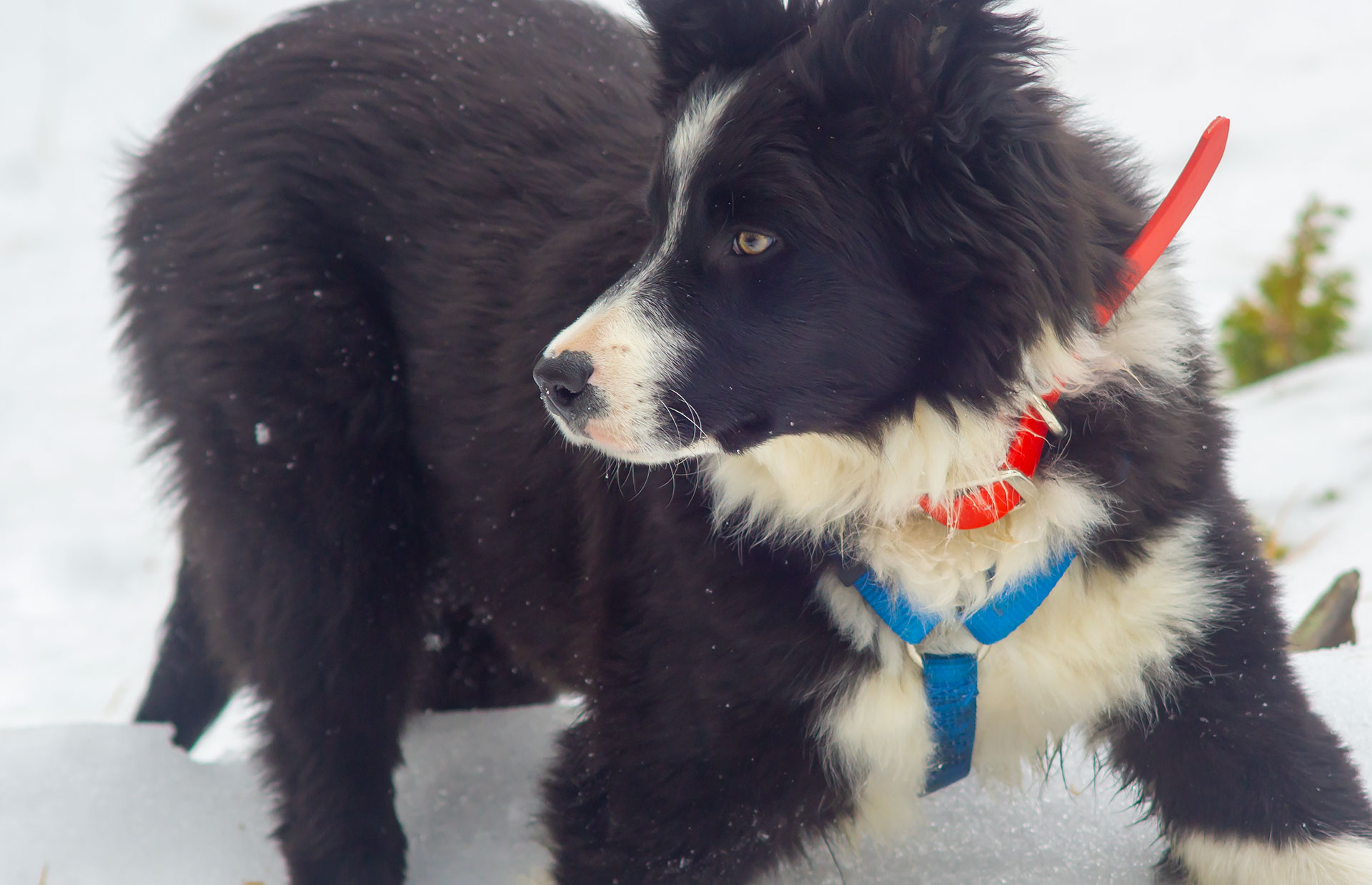 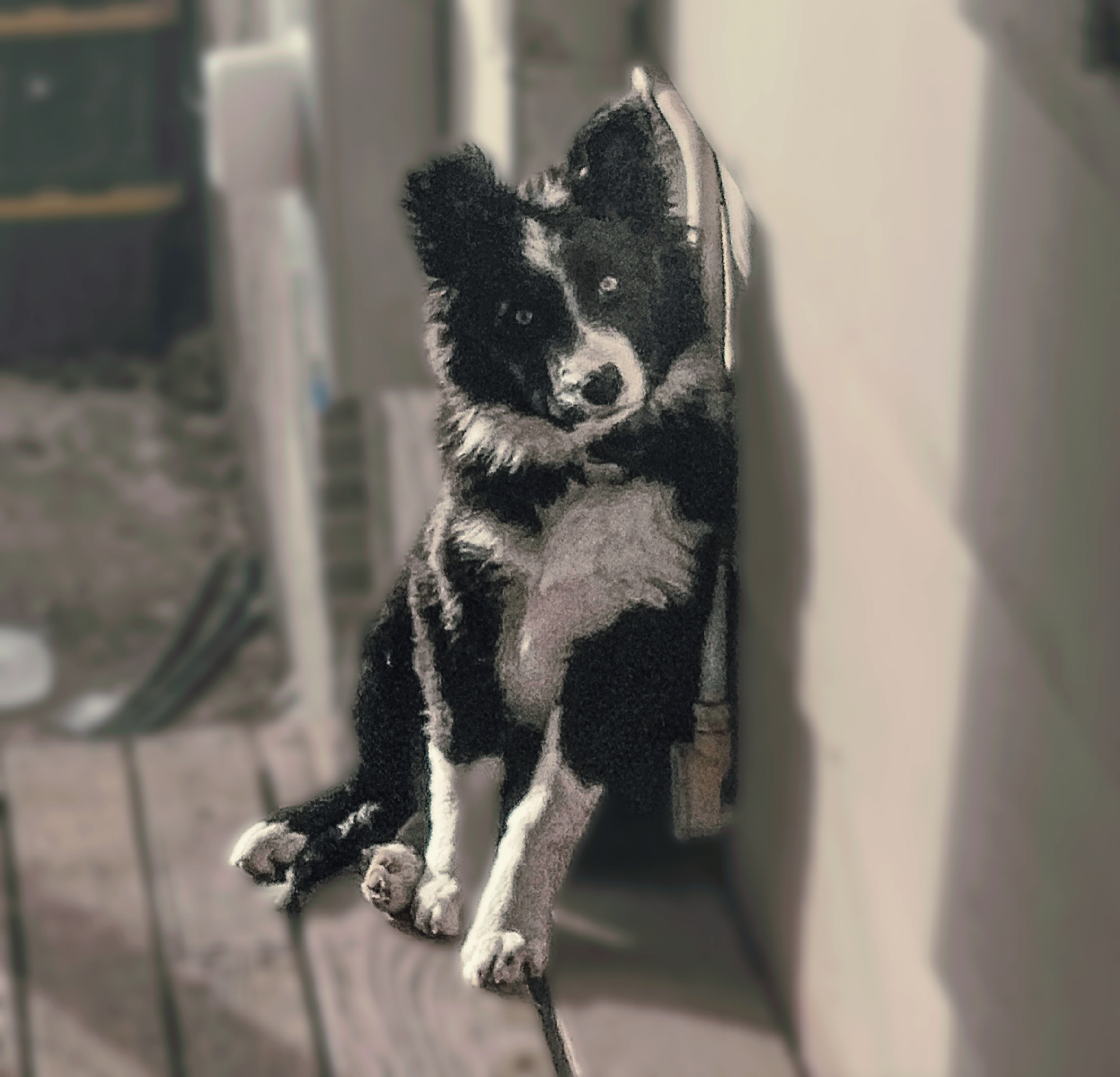 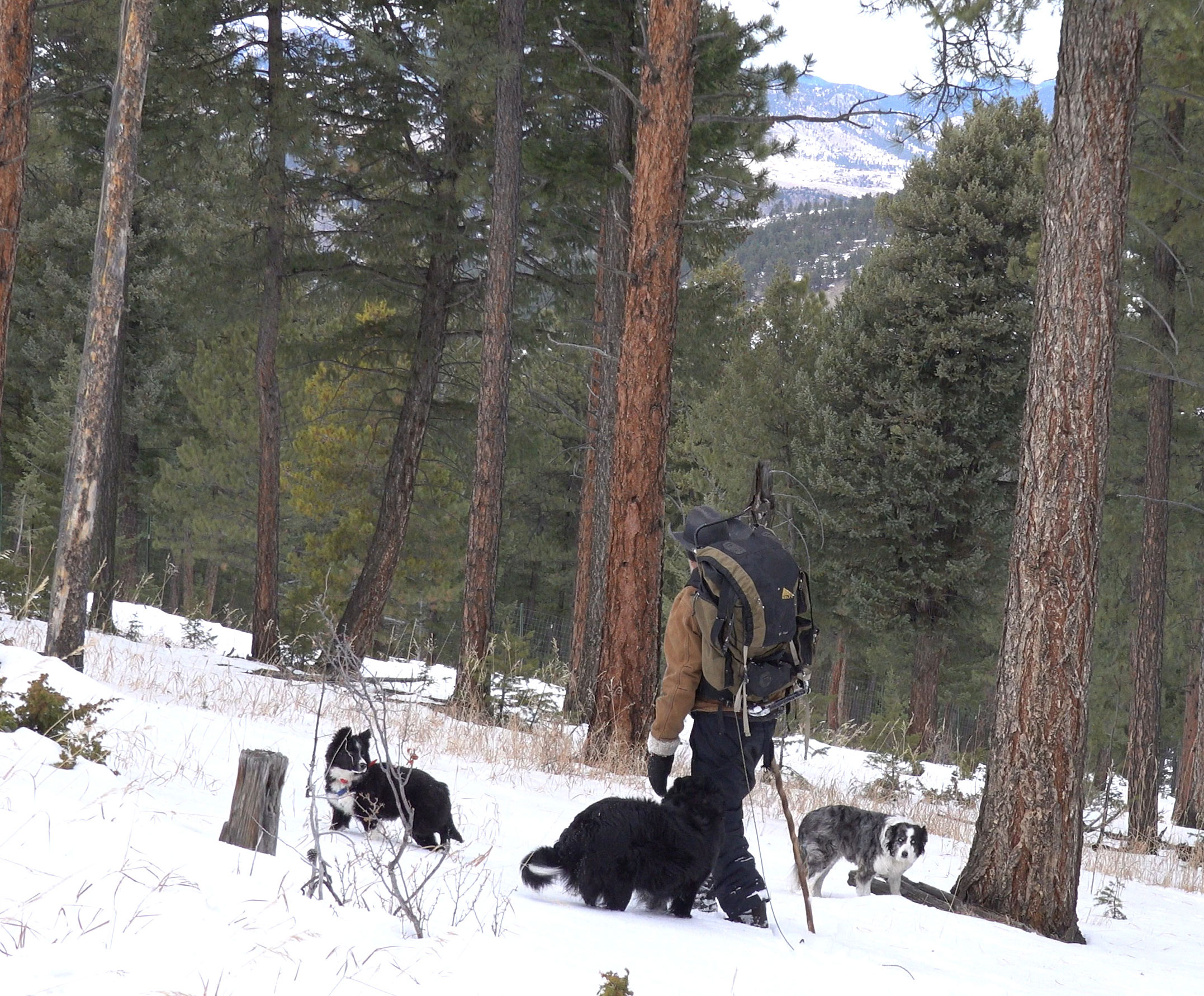 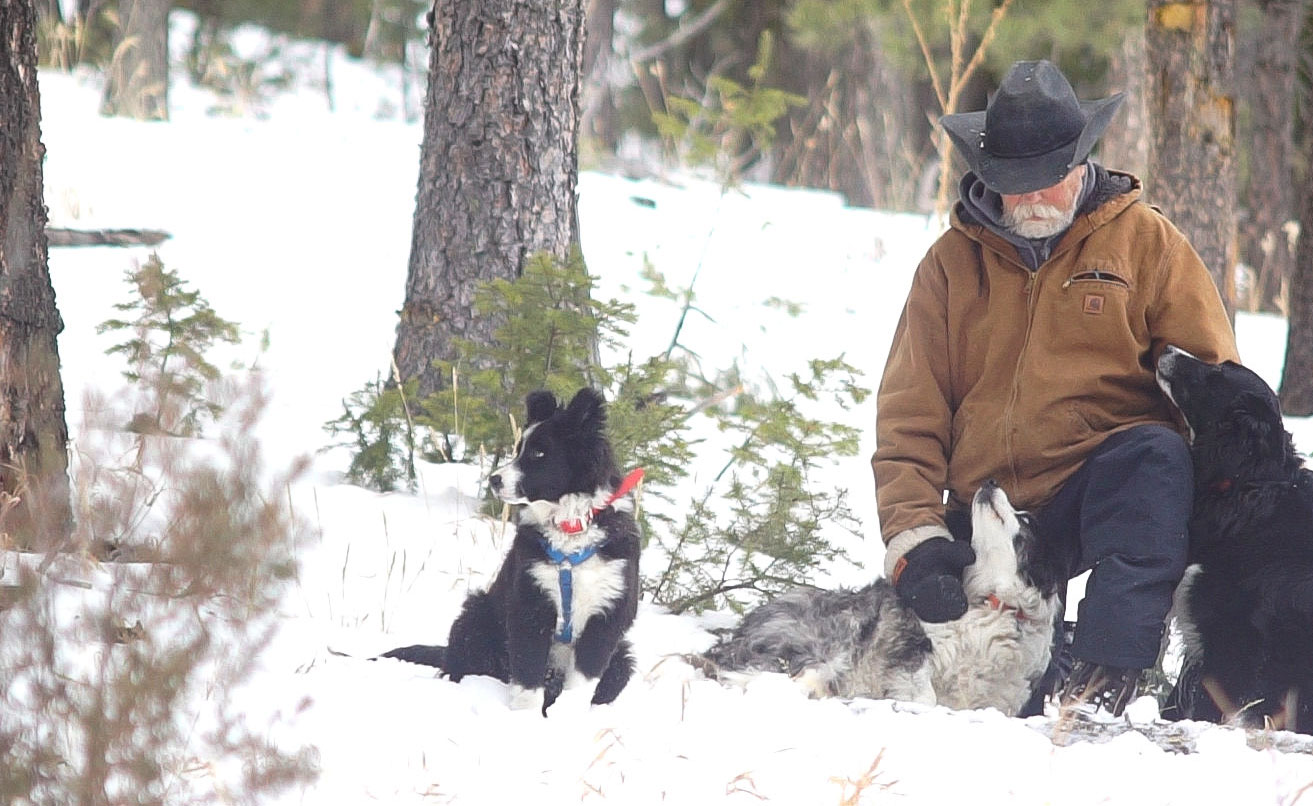 I have taken a lot of walks this cold January - nearly every day. It is a joy to see little Jess learn about the outdoors and her new life. She usually walks between Beau and Hayley, and they keep her moving along for the most part. There is still plenty of stopping to sniff and to examine something new, which is part of what being a puppy is all about. Not much gets past her.

The first few days she walked down by the river with us I saw her stop at the base of tall trees and look up at them, like she had not seen anything like that so tall and impressive before. (I mentioned this above, which I wrote three weeks ago).

After she hit four months old I took her to a dog park alone, mostly to see how she would react. (I was thinking if Beau and Hayley are ever gone, it would be nice to have her play with other dogs). After a few minutes of checking things out she had the time of her life - running all over the park with the other dogs and greeting everybody. This was a very different experience than I had with all my other borders, who would stay close to me and try to protect me. Jess has a very gregarious personality, loving everything and everybody!

I have a very good story to tell in the schools this month, one that is set down near New Zealand. It is about a young survivor of a shipwreck who finds himself on an island with dogs and sheep who had been abandoned, and what he must do to survive - The Boy Who Spoke Dog by Clay Morgan. I changed a lot of the story, fitting in pieces from The Island of the Blue Dolphins by Scott Odell. I last told the Boy Who Spoke Dog in 2011, and had a recording of myself from back then telling it, which I used to practice. It is one of my better stories and I am having a wonderful time with it this month. The ending has the boy rescued and not able to take his little border collie Moxie with him, because she is afraid of anyone else but Jack, and won’t let herself get caught. She stands on the cliff edge every day looking out at the sea, waiting for Jack to return. It is sad, and I let the story linger there for a while, before I mention that I will tell them the sequel next month, where Jack returns to be with Moxie.

One of the classrooms didn’t schedule me for January, which is always a little upsetting. I just figure they have other things going on, and it doesnt have to reflect back on me. (which is what I tell myself, but still fret and get a little down about it). The best way forward though is to try to do my best with the other classrooms, which are in six different schools. I thought back over the years and remembered this has happened five or six times in 15 years, and so is not that uncommon. The thank yous and appreciation I get from the other teachers and students makes me feel all my searching for stories and practice is appreciated. I have said before that volunteer storytelling is the best retirement job a person could have.

I am looking forward to maybe taking all the dogs out to Canyon Country in Utah soon, and also introducing little Jess to backpacking and sleeping in a tent. It is going to be a wonderful outdoors season. Right now I keep in mind that she is still a growing pup, and don’t wear her out every day.

As far as my recovery from the two heart stents in December, I have continued to dance to the fast triple steps at the Rose, and have continued to ride my mountain bike up the steepest hill I can find here in Applewood, with no problems. I catch my breath a lot easier than I did before the artery blockages were corrected. Yesterday I met with the heart doctor and he once again said the echocardiogram showed the rest of my heart was in good condition, and so there is no reason to limit my activity. I keep in mind what someone I respect told me recently, that our bodies are not made to last forever. Having that center in your consciousness enables you to see the beauty in each day, and to enjoy it to the fullest. I certainly do that when I am out with Jess and Beau and Hayley, and also out dancing when I catch the energy of the music and have a skilled partner who is right there with me and the band.